Statement regarding the ongoing Human Rights Violations in Sudan

As we continue to receive the news of ongoing shootings, crackdowns and the killing of peaceful protesters who bravely took to the streets in all major cities across Sudan, the Sudanese people -mostly youth- continue to sacrifice endlessly with the everlasting belief that their peaceful revolution will prevail against deadly weaponry.

Last week, reports indicated that the Janjaweed Militia (Rapid Support Forces) brutally burnt a number of villages in the locality of Moon Mountain, Western Darfur and reportedly killed and injured hundreds of citizens with reports of rape and sexual assaults levelled against women and girls.

The incident was confirmed by the United Nations Integrated Transition Assistance Mission in Sudan (UNITAMS). What has happened in Western Darfur amounts to a massacre and is a blatant proof that the leaders of the military coup continue to misguide the International Community about their decisions to stop the killing, despite the so-called political agreement signed on 21st November 2021 between General Abdelfattah Burhan and Dr. Abdalla Hamdouk.

The Sudan Doctors Union - UK Branch (SDU-UK) condemns the ongoing violence and human rights violations since the Military coup of October 25th, 2021, and would like to highlight the following:

1. The up-to-date death figure in Khartoum is 43 since October 21st, including 5 children.

3. Infringements were committed by the coup forces against property and people managing healthcare facilities, interrupting and limiting the ability to care for injured civilians. According to the Unified Office of Sudanese Doctors statement (21/11/21), at least 10 incidents of serious violations were recorded between 25/10 & 21/11/21 including the raiding of the National Blood Bank, denying wounded protesters to access hospitals, firing teargas inside hospital premises and the physical abuse and unlawful arrests of healthcare professionals and their patients while in health-care settings.

Furthermore, on November 30th, the military coup forces forcibly bombarded Al-Faisal Hospital with a footage clearly showing a wounded civilian being brutally arrested from inside the hospital and beaten by these forces. In addition, the Central Committee of Sudan Doctors confirmed that at least 98 injury cases were reported during the November 30th peaceful protests.

4. Concerns continue to be raised that many detainees (particularly members of the Resistance Committees) remain in custody with no indication of their whereabouts, reflecting the superfluous nature of the recent agreement imposed on Prime Minister Hamdouk.

The SDU-UK would like to remind the International Community including the UN, EU, AU and Troika that the political agreement signed between General Burhan and Prime Minister Hamdouk does not retain constitutional validity, nor resemble the Constitutional Document which was signed in August 2019.

The physical, political and legal violations of human rights (stated above) across Sudan continue, despite this infamous unilateral political agreement. In addition to sowing further seeds of discord among political and communal factions, this agreement has been widely rejected by Resistance Committees, who are the driving force behind the Sudanese Revolution.

We salute the Sudanese people, who defiantly took to the streets in their masses on November 30th sending a clear message to parties of this deal and the International Community, that no negotiations and no deals will be made with the leaders of the coup and no legitimacy will be granted to any partnership made with the perpetrators of these atrocities. 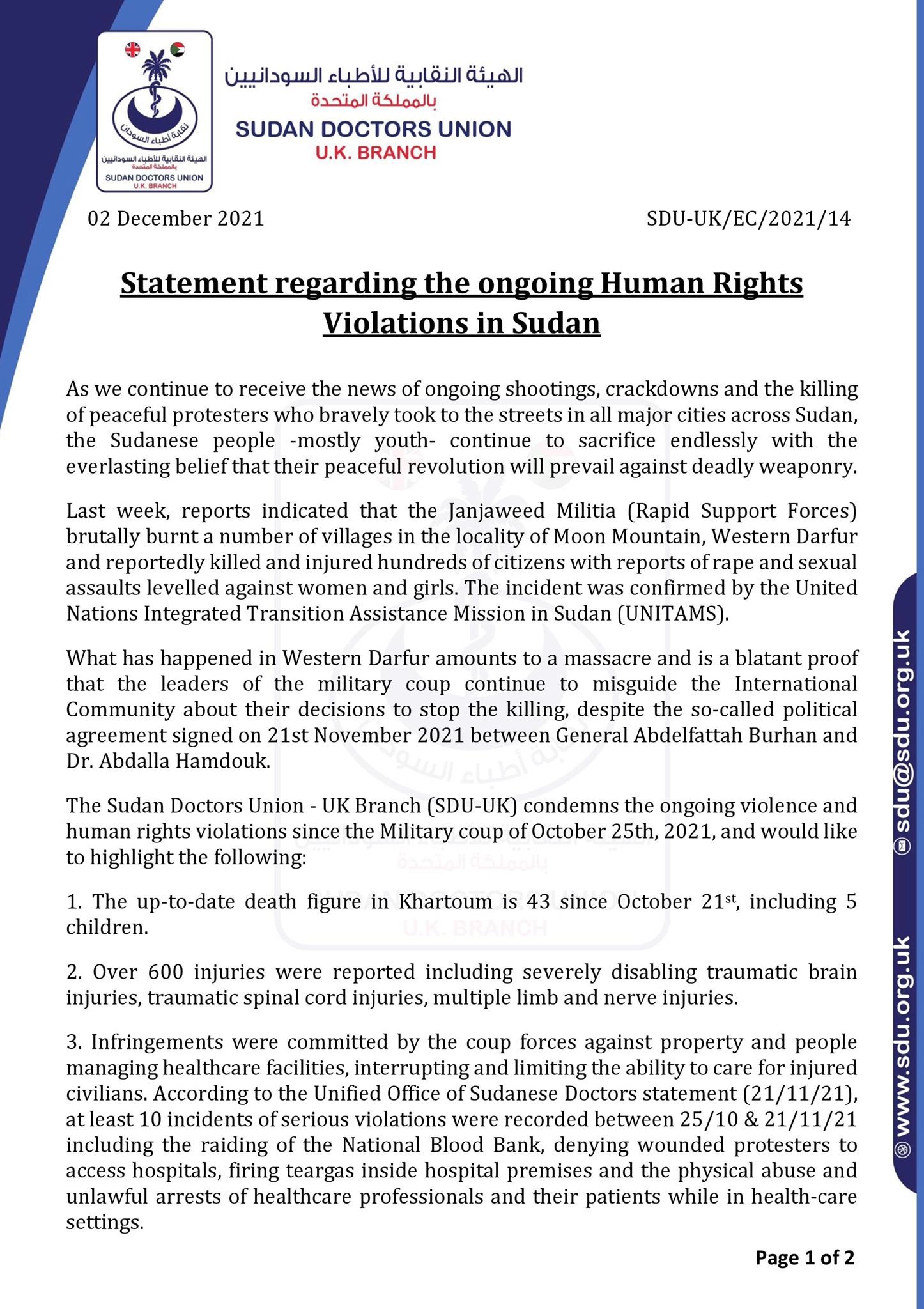 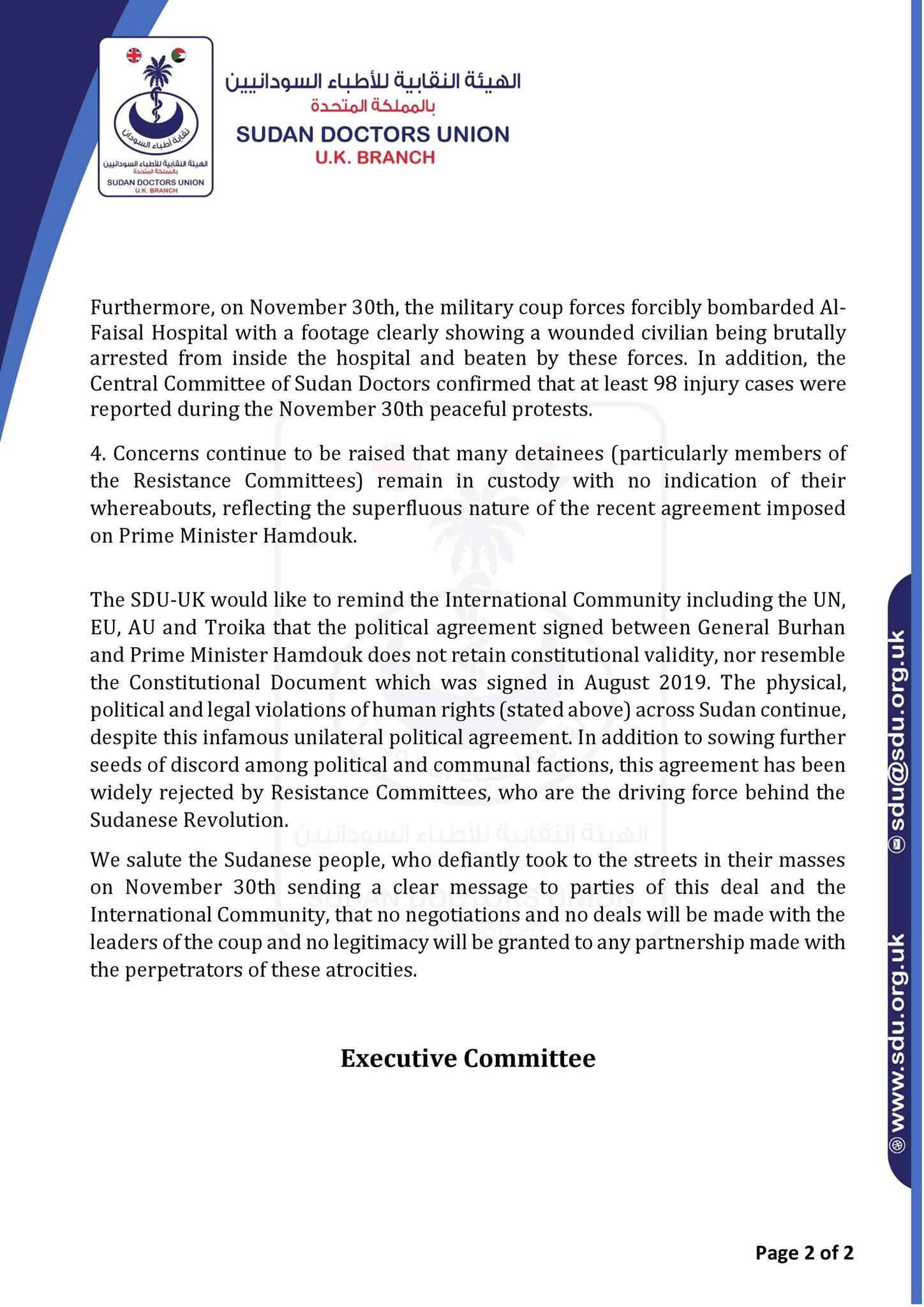