Since the military coup of the 25th of October 2021, the Sudanese people have persistently protested in mass numbers across the country to resist the imposition of autocratic rule. A litany of reports posted across various platforms have confirmed that the peaceful protesters were faced with brutal violence from the Sudanese Armed Forces and Rapid Support Forces (RSF).

Live ammunition, rubber bullets, tear gas and batons were the main weapons of infliction. Concerns have also been raised by doctors in Sudan that expanding bullets might have been used to disperse protesters (although this is yet to be fully verified).

Furthermore, submissions from the Central Committee of Sudan Doctors (CCSD) stated that 215 civilians suffered injuries during the 13th of November mass protests. The distribution of protesters affected is as follows; 70 in Khartoum city, 79 injured in the city of Omdurman, and a further 66 wounded in Bahri (Northern Khartoum). The CCSD also confirmed that 8 were killed during the 13th of November demonstrations (therefore 24 deaths have been verified in total since the beginning of the coup on the 25th of October). Among those brutally killed with live ammunition were children and/or teenagers less than 18 years old.

There are reports of similar violence against demonstrators in other cities and towns in Sudan; the true extent of which is still unclear, largely because of the internet shutdown and media blackout ordered by the military junta. Reports from the Unified Office of Doctors in Sudan confirmed that the Armed Forces and RSF militia forced their way into Al-Arbaeen and Sharq Elnil Hospitals (Khartoum state).

Once they gained access to the premises, they proceeded to physically attack staff members and force doctors and healthcare workers to surrender their mobile phones in an attempt to identify those suspected of supporting the popular protest movement.

The Sudan Doctors Union - UK Branch (SDU-UK) condemns the intentional targeting of healthcare workers and health facilities by the military and their associated militia groups.

Their inhumane intervention has obstructed healthcare workers from undertaking their professional duties at a peak of mass casualty incident, leaving these health facilities stretched and overwhelmed. We hold the leaders of the military coup, Generals Abdel Fattah Al-Burhan and Mohamed Hamdan Dagalo – known as Hemedti responsible for the atrocities and injuries suffered by peaceful protesters at the hands of the perpetrators whom they command.

The SDU-UK calls upon the international community to condemn these crimes and human rights violations carried out by the security forces, armed forces and RSF militia on peaceful protesters and the healthcare workers treating their fellow citizens.

We also call upon the international community, namely UK government, United Nations, African Union, European Union to exert more political pressure on the current leaders of the military coup. We urge Human Rights organisations to work constructively with professional unions both inside and outside Sudan to hold these actors accountable for the continuous and egregious human rights violations. 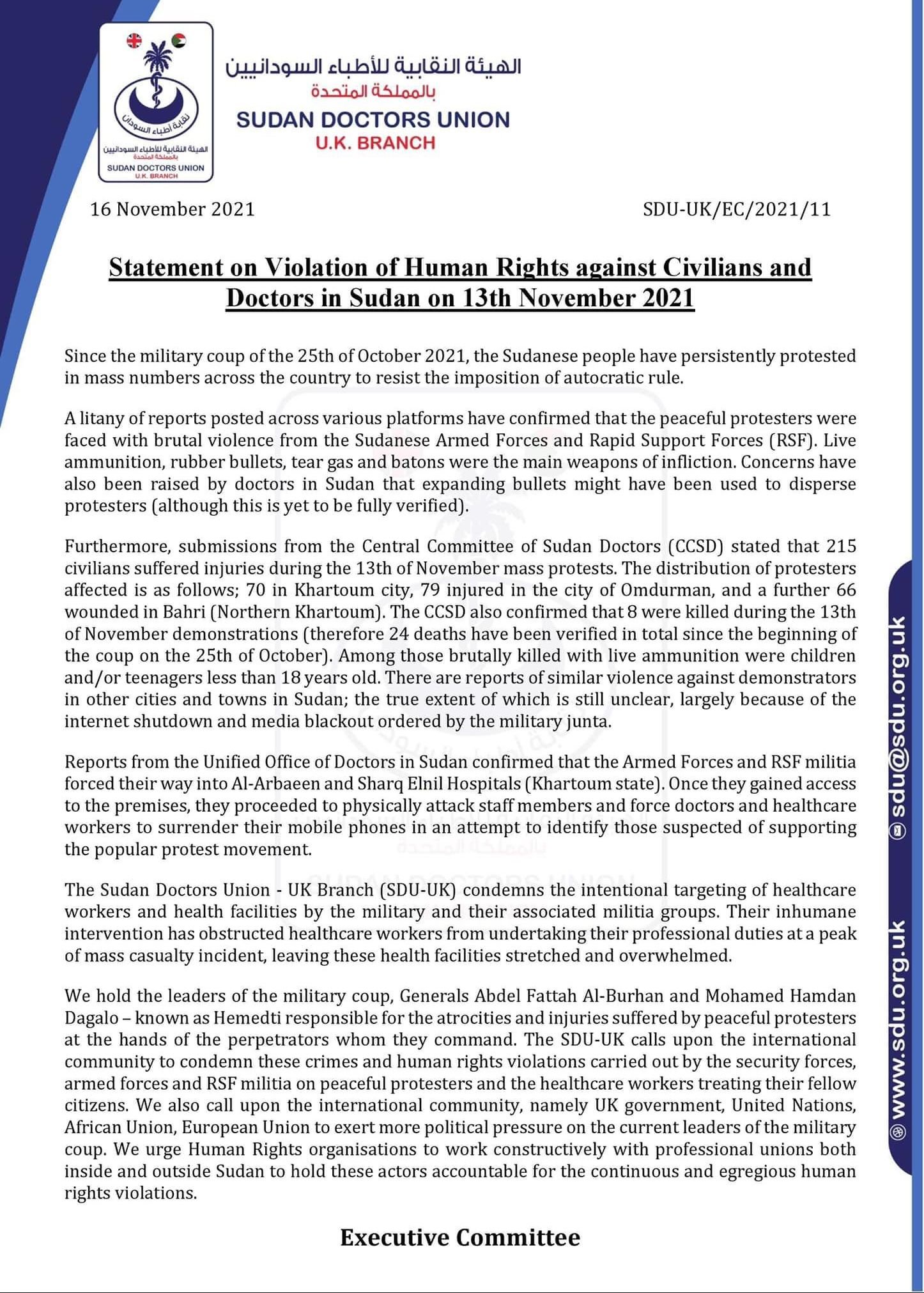