Statement on the current situation in Sudan

*Statement on the current situation in Sudan*

We must pay homage to the martyrs of freedom and change in Sudanese uprisings.

The Sudan Doctors Union- UK branch (SDU-UK) is extremely concerned and dismayed at reports received from the early hours of the morning of Monday 25/10/2021 where the Transitional military council (TMC) chairman, AbdelFatah El Burhan, unilaterally announced the imposition of martial law and the immediate suspension of the interim constitutional document (ICD), with desolation of all levels of the executive power, effectively threatening to end the national and international process and efforts for democratic transition in the Sudan, following the glorious peaceful December 2018 uprising.

We, at SDU-UK and in collaboration with our sister organisations at home and around the world, stand in complete solidarity, and unreservedly condemn this action by the military and security forces including the infamous militia of the Rapid Support Force (RSF) controlled by Mohamed Hamdan Dagalo, which have today embarked on a coup d’etat at a pivotal moment in our nation’s history, threatening to take the country back to the dark times of widespread violation of human rights, terrorism and autocratic rule seen during the previous Omer El Basheir “Ingaz” 30 year regime.

Multiple verified and eyewitness reports have been unfolding throughout the day regarding the heavy-handed brutal approach where the use of draconian measures and live ammunition against peaceful protesters in major residential areas all over Sudan, has led to widespread terror, hundreds of casualties and many fatalities. Medical services and institutions (central blood bank service) have also been subject to attacks and raids by armed insurgents allied to the security forces. University of Khartoum female residential blocks have also been attacked and girls accosted and beaten.

Furthermore, we are extremely concerned for the safety of the civilian contingent at all levels of the hybrid partnership administration, including Mr Mohamed ElFaki (supreme council member) and Prime Minister Dr. Abdalla Hamdouk and his wife, and other civilian members of the cabinet, as well as prominent leaders of civil society and political parties, that have been accosted and forcefully incarcerated against their will, and their whereabouts remain unknown.

From the early hours of Monday, there has been an unprecedented, unified refusal by the Sudanese people at home and in the diaspora as well as all professional, political and civil groups and institutions, showing an unwavering commitment towards full civil disobedience in defiance of this coup d’etat.

The Sudanese people, since the December 2018 uprising and before, have embarked on a committed transformation process to democracy by way of national rehabilitation of our civilian institutions and communities, as well as agreements with the international community to enable the return of our nation back to the ranks of peace loving countries.

The SDU-UK believes there can be no grey area here. We also understand and are very well aware of the international complexities that will not only challenge you as politicians but also as human beings. We therefore call upon the international community, the United Nations, the African Union, the European Union and the good people and governments of the G20, to support our threatened democratic transformation by opposing this coup d’etat and honoring agreed commitments to full civilian rule. 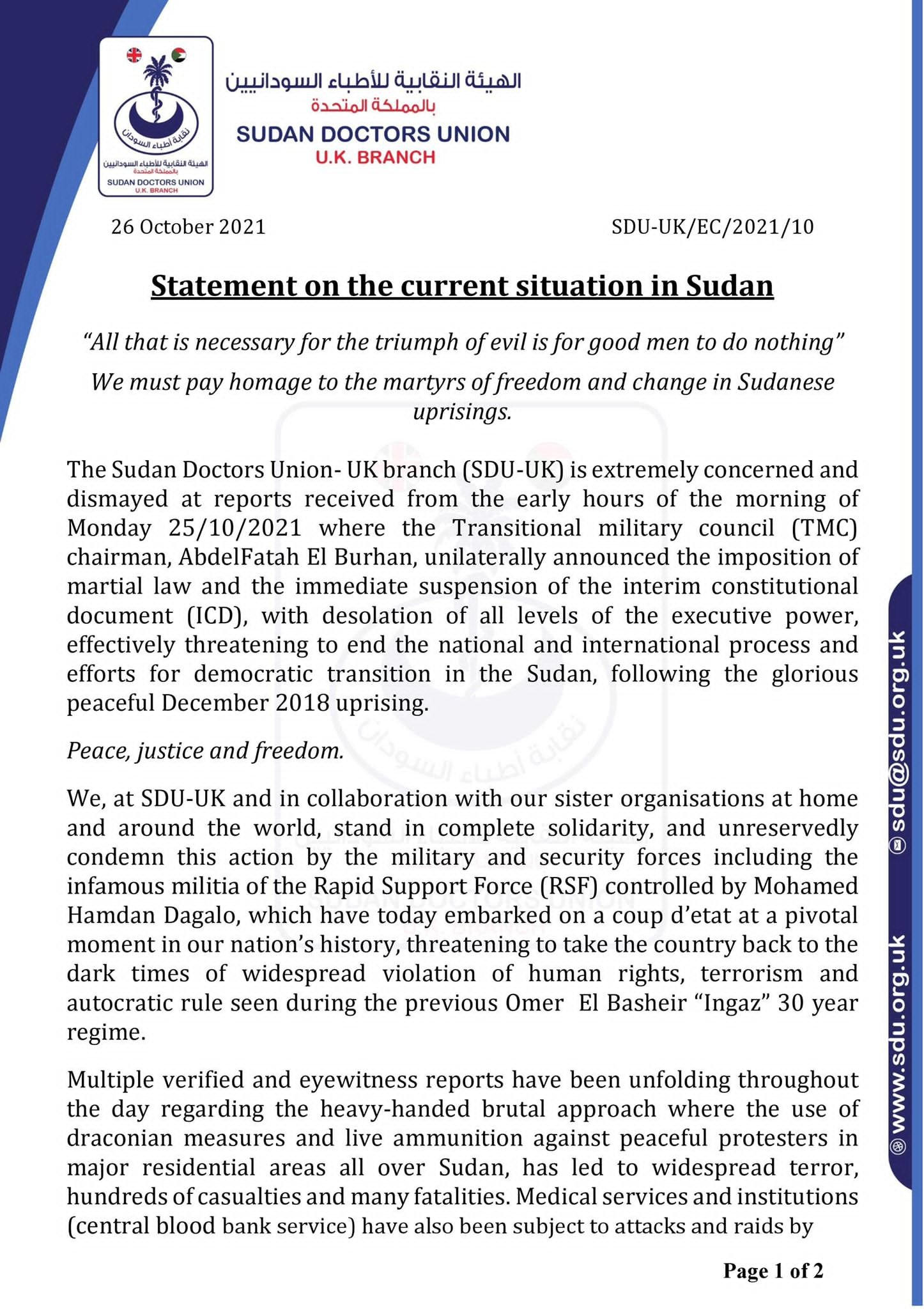 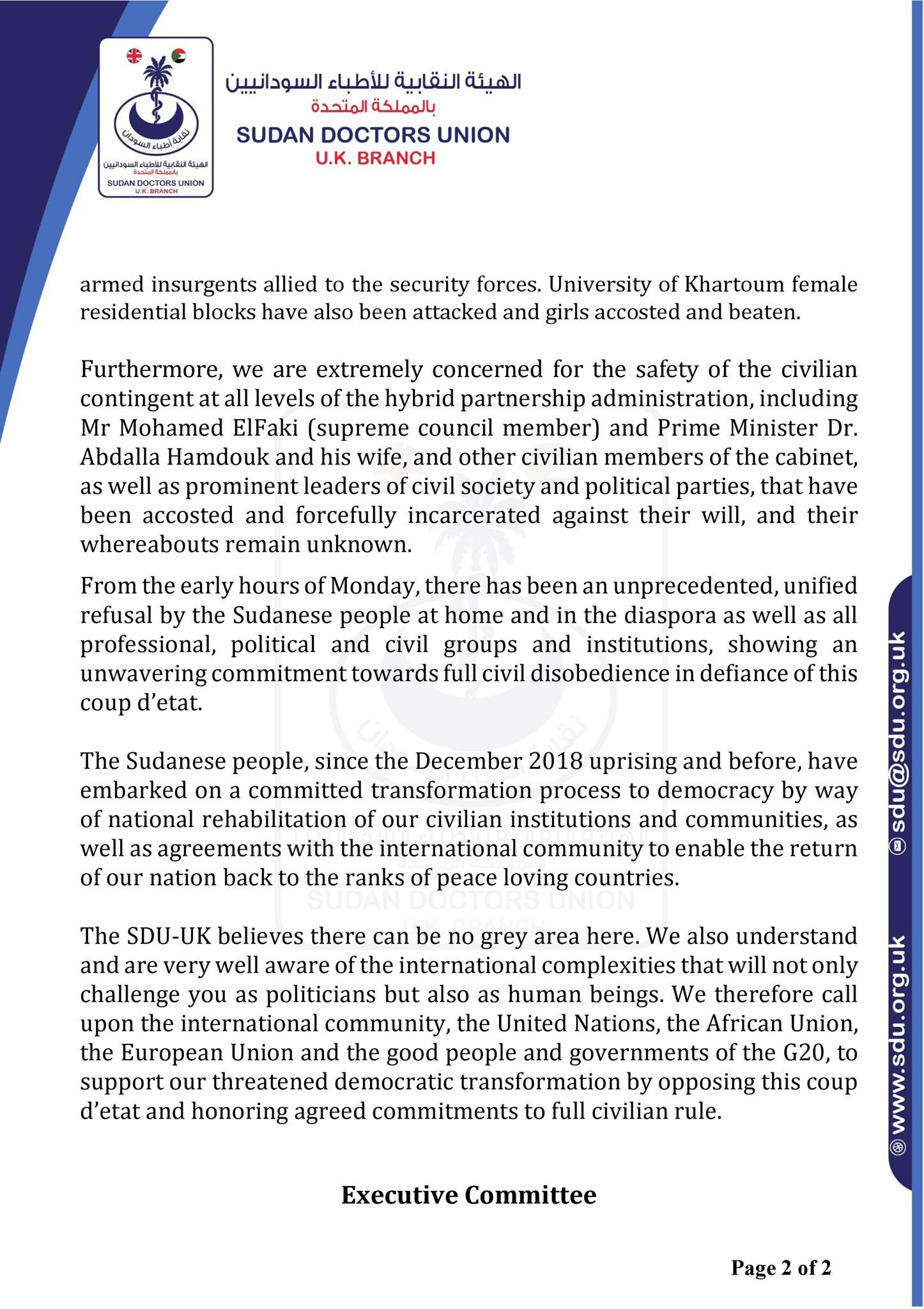